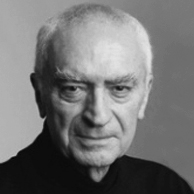 Massimo Vignelli was born in Milan on 10 January 1931, he is considered an example of Italian genius and creativity in the world. He studies architecture at the Milan Polytechnic and at the IUAV University of Venice. Over the course of his long career, he ranges from Product Design to Design of Exhibitions to Graphic Design, where he achieves the best results and notoriety.

The young Vignelli attended the studio of the Castiglioni brothers in Milan before moving to New York dome, in 1965, together with others, he founded the communication and design agency Unimark International with offices in various countries. It grows with the generation of great architects such as Vittorio Gregotti, Aldo Rossi, Gae Aulenti, Guido Canella and others.

Paolo Venini, owner of Venini Glass, offers Vignelli, a student in Venice, the opportunity to design some blown glass lamps for him. Those lamps, exhibited in various museums, are among his first design experiences and among the first recognized works.

Among the most significant examples of his graphic works are the first version of the stylized map of the famous New York subway in use until 1972, now on display at MoMA, or the manual for the use of the Helvetica font for New York transport signage. Other important examples are the American Airlines logo (later renewed amid controversy), the Bloomingdale logo, Benetton, various restylings of Cinzano, IBM and Lancia.

In 1971, with his wife Lella, he opened Vignelli Associates, also based in New York.

Its motto "Design is one", inspired by the idea "from the spoon to the city" of the Austrian architect Adolph Loos, means that, having become aware that each sector needs specific skills, the true designer is the one who, by mastering the design process, is able to apply it to anything.

At the origin of Vignelli's creative and production process are three basic concepts: simplicity, disinterest in fashions and visual power, explained in an interview in 2013: "In the case of a coordinated image for the industry, it is important to design a identity that lasts over time. The implementation of a new image is expensive and cannot be changed for the sake of novelty or worse to cover the shortcomings of inadequate management. The same goes for the design of furniture, which unlike a dress are not thrown away after a short time. Forced obsolescence is a crime, an expression of social irresponsibility that increases the waste of energy and money to the detriment of users."