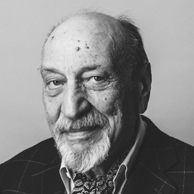 Milton Glaser was born in New York in 1929, American designer and illustrator, trained at the High School of Music and Art and at the Cooper Union art school in New York and a scholarship at the Academy of Fine Arts in Bologna in 1951.

In 1954 he founded with Seymour Chwast Push Pin Studios, a heterogeneous group of graphic designers that carried out the activity until 1974, dividing his time between experimentation and recovery of the historical tradition.

In 1968, Glaser and Clay Felker founded the New York Magazine, where Glaser was president and director of design until 1977. The publication became the model for city magazines and stimulated a myriad of imitations.

In 1974 he opened Milton Glaser, Inc. The work produced in this Manhattan studio includes a wide range of design disciplines. In the field of printed graphics, the studio produces identity programs for corporate and institutional marketing purposes including logos, stationery, brochures, signage and annual reports.
In the field of environmental and interior design, the company has conceptualized and supervised in-house the manufacture of numerous products, exhibitions, interiors and exteriors of restaurants, shopping centers, supermarkets, hotels and other commercial and retail environments.

Glaser is also personally responsible for the design and illustration of over 300 posters for clients in the publishing, music, theater, cinema, institutional and civic industries, as well as those for commercial products and services. The studio continues to be a dynamic and lively place to work and create.

He collaborated with Walter Bernard in 1983 to form the design company WBMG.

Since the beginning of his career, Milton Glaser has been an active member of both design and education communities. He has been a teacher and member of the board of the New York School of Visual Arts since 1961 and is a member of the Cooper Union Board of Directors, in New York.
He has been affiliated with the Aspen International Design Conference since 1972 (president 1990-91) and the American Institute of Graphic Arts, where he was vice president and co-president of the 1989 national convention.

Throughout his career, Glaser has been a prolific creator of brands, posters and prints. His works have been exhibited in exhibitions throughout the world, including solo exhibitions at the Georges Pompidou Center in Paris and at the Museum of Modern Art in New York and are featured in the permanent collections of many museums: the MoMA Museum of Modern Art in New York , Israel Museum in Jerusalem, Smithsonian Institute in Washington DC and Cooper Hewitt National Design Museum of New York.

Milton Glaser is an influential figure in the world of design and education. Holds honorary doctorates from the Minneapolis Institute of Arts; Moore College; Philadelphia Museum School; The school of visual arts; Queens College, CUNY; the New York University of Buffalo and the Royal College of Art in London. Elected member of the Pinocateca of Bologna, in Italy, and in 1992 he received the Honors Awards from the American Institute of Architects (AIA).

Among the numerous awards received, the Lifetime Achievement Award 2004 from the Smithsonian Cooper-Hewitt - National Design Museum, for its profound and significant long-term contribution to the contemporary practice of design.
Awarded the gold medal of The Society of Illustrator, the St. Gauden's Medal of The Cooper Union and the Prix Savignac for the most memorable poster of the world of 1996.
Milton Glaser is a member of The Art Director's Club Hall of Fame and the American Institute of Graphic Arts (AIGA).

In 2009, the President of the United States handed him the National Medal of Arts, for his outstanding contribution to the development of Graphic Art.