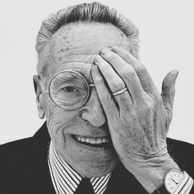 Achille Castiglioni was born in Milan in 1918 and since 1940 is dedicated to experimentation on industrial products, along with architect brothers Livio (1911-1979) and Pier Giacomo (1913-1968). With the latter, after graduating in architecture in 1944, gives life to a business project characterized by research on the forms, techniques and materials "new", tending to the realization of a design process "integral".

Castiglioni is one of the founders of ADI, Association for Industrial Design, is featured in numerous editions of the Milan Triennale, until the "new Triennale" 1979, which is among the twelve Italian designers of the "Design Collection".

Acquires special importance of the role played by Achille Castiglioni in creating some of the most brilliant objects of modern design, designed in many different types and with success internationally, with numerous productions, from those for the Triennale di Milano until ' display of the collection at Zanotta "Design Forum" in Linz in 1980.

Its production is documented in the essays on Italian design, in the annals of the Compasso d'Oro Award (often assigned), as well as in the collections of the most important design museums of the world.

In 1980 the archive of the study held with his brother Pier Giacomo was acquired by the Centre for Communication Studies and Archives, University of Parma.

In 1986, the Gothenburg Rohsska Konstslöjdmuseet devotes an exhibition of pieces he designed for Zanotta and Flos.

Many of the major works of Achille Castiglioni exist at the MoMA in New York, where it was made in a large retrospective exhibition:
ACHILLE CASTIGLIONI DESIGN!.

Design activity and the critical (in the period between 1950 and 1960 conducted by the magazine "Stile Industria") joins the teaching practice: lecturer since 1969, since 1981, Achille Castiglioni was Professor of Furniture and Industrial Design at the Faculty of Architecture of the Politecnico di Milano.

Among the projects designed by Achille Castiglioni: