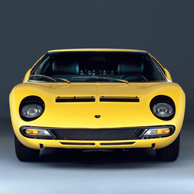 The Miura Lamborghini is a sports car produced by the Sant'Agata Bolognese house from 1966 to 1973, designed by Giotto Bizzarrini, Gian Paolo Dallara and Paolo Stanzani with the design of Marcello Gandini, head designer for Bertone.

Miura is the first car to be defined as a "supercar". Before the arrival of the Miura, many sports cars offered high levels of performance and handling, but the Lamborghini was the first to be built with criteria that define the modern concept of supercar: high speed, extraordinary design and technical innovation, in addition to price, reach of high-level customers with great passion.

Until 1965 Lamborghini was known for being on the market for many years for its production of tractors. Despite this, the Sant’Agata Bolognese house is already known for two previously built GT models, the 350GT and the later 400GT.

At the 1965 Turin Motor Show, Lamborghini exhibited a boxed sheet metal frame, the TP400. The engine and suspension previously used for the 400GT model were installed on the chassis. The project is carried out by Gian Paolo Dallara as an engineer and Paolo Stanzani as frame builder who, despite Ferruccio Lamborghini's aversion to racing, position the engine in the central area like some racing cars with the difference in the transverse assembly, between the passenger compartment and the rear axle. reducing its size. The solution is innovative compared to most of the contemporary Gran Turismo sports that use the front engine with rear wheel drive.

Nuccio Bertone, present at the presentation in Turin, said to Ferruccio Lamborghini: “I am the one who can do the shoe to your foot”. Lamborghini is convinced to approve the project, despite the doubts: “It will be good publicity”, he declared to his technicians, “but we will not sell more than 50”.
Bertone's choice for the bodywork is favored by the fact that he had no relationship with Ferrari and Maserati, Lamborghini's main competitors. The new car is designed by the young stylist Marcello Gandini, who recently became Bertone's chief designer to replace Giorgetto Giugiaro who moved to Ghia.

The car's design was completed in just 4 months, its design revolutionized the concept of sports cars and entered the history of the automotive world.

Ferruccio Lamborghini, born under the sign of the bull, baptized the newly finished car with the name Miura in honor of the breeder of fighting bulls Don Eduardo Miura Fernandez. Miura is the first of a series of Lamborghinis baptized with names linked to bullfighting. In addition, the initials of the frame lost the T although the mechanics had not undergone significant changes.

Presented at the 1966 Geneva Motor Show under the name Miura P400 is a great success. The car is so innovative that it "ages" all competitors, starting a new era in the sports car industry. The Miura is the Lamborghini super sports car that brings the young Italian house to be known all over the world.
At its debut, the Miura is the fastest car in the world: with a top speed of 280 km / h and acceleration from 0 to 100 km / h in 6.7 seconds.

The Miura P400 features innovations such as retractable headlights (actually taken from the Fiat Spider) with the characteristic eyelashes, as well as different stylistic elements such as radiator grilles or electric windows. The substantial novelty of the Miura P400, however, is under the dress, that is, in the engine; the one of the previous Lamborghini 400GT is not installed but a new 3.9-liter V12, an evolution of the previous project.

The Miura Lamborghini, launched in the world of sports cars, must constantly update to remain competitive on the market.
In 1968 the car evolved into a slight exterior restyling with the P400S model, with the addition of grilles to the radiator and a more powerful 276kw engine, compared to the previous 260 as well as various technical improvements.

In 1970 the Miura Jota was created, a racing model with a 440CV engine. Ferruccio Lamborghini, however, still remained against the world of motor racing, which is why this model, renewed in design, is used only for the tests of subsequent models immersed in the market.

The definitive version of the Miura SV (SuperVeloce) was launched in 1971 with a 287 kw engine that reached a speed of 380 km / h. In this model the restyling involves the widening of the rear, the insertion of wider tires and the headlights that lose their original characteristics.

A latest model of the Lamborghini Miura is the Roadster which, maintaining the aesthetic characteristics of the P400, is equipped with a removable roof, so as to make it convertible.