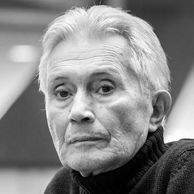 Marcello Gandini was born in Turin in 1938, the son of an orchestra conductor, he has been passionate about car design and mechanics since childhood. Unquestionably talented designer, he is known for designing some of the most beautiful sports cars of the sixties and sixties. He also deals with industrial design and furnishing accessories.

After graduating from high school, he began to deal with interior design as an independent designer.

In 1963, at the age of 25, looking for work, he turned to Nuccio Bertone, head of the Bertone Group. Giorgetto Giugiaro, then Bertone's chief designer, opposes his hiring. When Giugiaro left the company, after a couple of years at the Marazzi body shop, Gandini was hired and worked for Bertone for fourteen years.

He designs some of the most successful Italian sports cars of the 60s and 70s, including the famous and revolutionary Miura and the Countach for Lamborghini, Alfa Romeo Montreal, Lancia Stratos, Fiat X1/9, as well as numerous "cars practices "such as the Citroën BX, the first generation BMW 5 Series, the Mini Innocenti and the Renault Supercinq.

In 1980 he left Berone to devote himself to the activity of freelance designer.

The collaboration between Gandini and Innocenti of Milan was significant, leading in 1974 to the presentation of the new Mini 90/120, cars which in various mechanical evolutions, but with a substantially unchanged bodywork, remained in production for 19 years, demonstrating a design capable of withstanding temporary fashions.

Gandini signs other masterpieces such as the Lamborghini Marzal (1967) and Alfa Romeo Carabo (1968) concepts, prototype that brings to the debut the famous "Lambo doors" or "scissor doors", still used today by the supercars of Sant'Agata Bolognese and for production models the Lamborghini Espada (1968) and the Autobianchi A112 (1969).

During the seventies Marcello Gandini turned to the creation of angular shapes with real sports capable of seducing both the public and the critics. The aforementioned Alfa Romeo Montreal, the Lamborghini Jarama and the futuristic (as well as very low: only 84 cm in height) Lancia Stratos Zero concept saw the light of day. The following year it was the turn of the Lamborghini LP500 prototype (which in 1974, with few modifications, became the Countach).

Gandini's sports continue to seduce the public and critics. A few examples? The Fiat X1/9 and the Lamborghini Urraco of 1972 and the Lancia Stratos of 1973, a car capable of winning four World Rally Championships (3 Constructors from 1974 to 1976 and the first ever Drivers' title with Sandro Munari in 1977), in 1974 he designed the Maserati Khamsin.

In 1980 Marcello Gandini left Bertone and began to work as a freelance creating cars such as the Citroën BX of 1982 and the second generation of the Renault 5 of 1984. In the second half of the decade he took care of the development of the Lamborghini Diablo but his project was rejected in 1987 by Chrysler, the new owner of the Casa del Toro.

In the 90s Gandini collaborated with Maserati, he designed the 1990 Shamal, the second generation of the 1992 Ghibli and the fourth series of the 1994 Quattroporte. The 1991 Cizeta V16T supercar is particular year earlier from Chrysler top management.