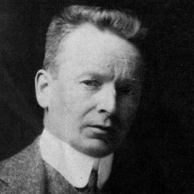 Eliel Saarinen, architect (Rantasalmi, Mikkeli, 1873 - Bloomfield Hills, Michigan, 1950). The first phase of his vast output of work is inserted in the experience of the typical Northern European countries in which the themes of Art Nouveau came together in a romantic eclecticism comforted by the study of the size and nature of national traditional materials.

Realized in Helsinki, among others, the National Museum (1902-04) and the station (1904-14), then developing a plan for the city (1917-18). In 1923, won the 2 nd prize in the competition for the headquarters of the Chicago Tribune, moved to the USA (naturalizing in 1945), where he carried out an intensive planning and teaching, particularly at the Cranbrook Academy of Art (1925-50) in Bloomfield Hill. After 1937 came as a collaborator's son Eero.

Formed in Northern European artistic climate was influenced by Art Nouveau architects of the British and Germans. His masterpiece is the European Helsinki railway station (1910-1914), but medievalizzante romantically designed with modern sensibilities and with references to indigenous motifs (like the epic poem Kalevala) contaminated with suggestions coming from the Finnish secession of that period.

After participating in the competition for the Chicago Tribune tower (second prize) moved to the United States of America in 1923, remained true to his cultural complex of buildings in the Cranbrook Academy (1925-1940) but was certainly influenced by American culture and personality of his son Eero with whom he collaborated, in 1937, in later works.