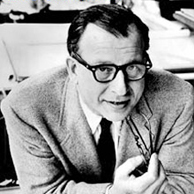 Eero Saarinen was born in Finland in the city of Kirkkonummi. He studied in Paris at the Academie de la Grande Chaumiere and at Yale University in New Haven, Connecticut.He moved to the U.S. in 1923, diplomaa Yale in 1934, became a partner of his father's work, the noted designer Eliel Saarinen, a figure of great importantza expression of Northern European Art Nouveau movement, soon claiming his personality.

Eero Saarinen initially focused its attention on sculpture, his favorite form of artistic expression, and after having spent a year at art school, cominciaad also interested in architecture and decided to become an architect. A large part of his work shows relationships with the sculpture.Successfully developed a wide range of creations of architecture and design through experimentation with color, shape, and an endless list of materials.

Saarinen has always been supporter dell'inovazione in the creation of structures and forms sculptural with a pragmatic approach to the functionality of the product, and requsiti for the production.It 'been able to work in harmony with both international conventions and styles with their own kind of expressionism.

One of his toughest jobs in the architectural field is the General Motors Technical Center in Warren, Michigan city completed in 1955, in which you experience the signs of industrial rationalism of Mies van der Rohe, but forms less classicist.The same year the chapel and the Kresge Auditorium at the Massachusetts Institute of Technology that mark for Saarinen acquisition of a language more consistent and personal.

After these early research eclectic between rationalism and romanticism of Scandinavian derivation, Saarinen is imposed in the new architecture with the American Hockey Rink at Yale in New Haven, completed in 1958, kind of immense concrete dinosaurs, expressive not only in form but also in interior space.

This conquest was confirmed by spatial and expressionistic 'Dulles Airport in Washington, but especially in his masterpiece, the TWA terminal at John F. in the Airport International Kennedy in New York (completed posthumously in 1962) and expressive light beam in flight wings resting on the ground, in which the interior space is shaped and molded into any detail.