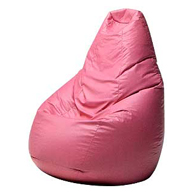 Sacco is a "revolutionary" session designed in 1968 by Piero Gatti, Cesare Paolini and Franco Teodoro, produced by Zanotta.

The Sacco anatomic armchair consists of an envelope containing balls of high resistance expanded polystyrene, covered in fabric or leather.

From the day when the three architects arrived in Turin at Zanotta with a "bag" in PVC for three quarters filled with polystyrene balls with the idea of â€‹â€‹developing an industrial project, the Sacco armchair has made a special path.

From a cult object that has become an icon of light, modern and informal design, it has conquered an undisputed world record, establishing itself as one of the highest expressions of Italian creativity.

La Sacco is one of the most significant cases of a design product capable not only of overcoming the traditional project boundaries, rewriting the rules entirely, but also of interpreting and representing an era.

An innovative armchair without the use of a support structure and which, thanks to its unstable shape, adapts to the user's position, taking on different shapes and satisfying the different moods.

For the first time a "sitting" is made without a rigid structure, it follows the volumes and movements of the body without imposing a pre-established position, harmoniously supporting the different postures and adapting its shape to the different proportions.

Sacco received a report to the X Compasso d'oro of the ADI.

In 1972 he was exhibited at the MoMa in New York and later in numerous international museums that included it in their permanent collection of contemporary art or applied or exhibited temporarily. Between these: