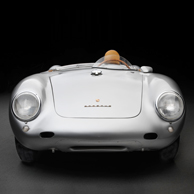 Porsche 550 Spyder is a classic and iconic roadster model of the German manufacturer, designed in 1953 that comes from the inspiration of the Porsche 356 (without the rigid roof).

The lightness of the car, 590 kg, aerodynamic penetration and good distribution of masses, allow the 550 to reach the speed of 220 km / h, with acceleration from 0 to 100 km / h in less than 10 seconds, maintaining directional agility and great road holding.

The 550 Spyder is produced between 1954 and 1957, designed for road racing like the Mille Miglia, very popular in those years, both in Europe and in America.

The 550 Spyder was the first true racing car produced by Porsche to compete in the roadster class. The 550 prototype wins its first major competition at the famous Nürburgring Eifel Race in 1953. Following that first success, the 550 has racked up 95 wins and 75 class wins out of a total of 370 races.

After other participations of the prototypes at some races, such as the 24 Hours of Le Mans, in October 1953, at the Paris Motor Show, 550 Spyder was presented, designed for street competitions that at the time animated the European streets and Americans, with great public success and representing the most effective advertising medium for car manufacturers.

In November 1954, subjected to the requests after the convincing participation in the Carrera Panamericana of that year, Ferry Porsche decided to start also a production of "550 Spyder" for sporting customers, generally called "550S" and, subsequently, of road in small series , generally referred to as "550A". A total of 90 were built, of which only 15 in the "550RS" and "550A RS" versions.

In 1956 the official team employed two Porsche 550 Spyder with the baron Wolfgang Graf Berghe von Trips and Umberto Maglioli and the duo Richard von Frankenberg and Hans Herrmann. Von Trips and Maglioli reach the fourth place in the overall classification and with this they win the first class victory for Porsche in the category up to 1.5 liters of displacement. The other 550 is second to the finish line (the absolute winners are the Maserati Taruffi, Schell, Behra, Moss drivers).
One of the most impressive performances of the small Porsche takes place later in the same year at the 12 hours of Reims in France. A double, characterized by the couple Von Frakenberg and Storez with an average speed of 264 km per hour.

In 1956 the 550A model was built, which is not only the evolution of the previous model, but a revolution.
Leopold Schmidt brings the 550 to new levels of performance with its wraparound design and "spatial structure" that serves as a passenger compartment.
The engine is entrusted to the model 547 of Porsche. Compact and complex, this engine, designed by Ernest Fuhrman is characterized by the crankshaft with roller bearings and double spark ignition, double cams on top of both sides of the 4-cylinder boxer.

The Porsche 550 Spyder has enjoyed a legendary career and was produced in 90 units, including 43 as "car customers".
Among the 90 550 Spyder produced there is also the "Little Bastard" by James Dean (1931-1955), notorious for being the car on which the American actor found the death in an accident only 9 days after having withdrawn from his dealership.
The name "little bastard" had been assigned by Dean for the incredible performance of which he was capable.