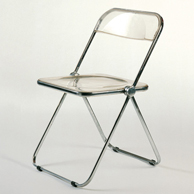 The Plia chair, designed by Giancarlo Pirretti, was presented at the Milan Furniture Fair in 1967, obtaining a lot of public acclaim.

The design of the Plia chair revolutionizes the concept of folding seating with its innovative "3-disc rotation pin".

The combination of steel frame, seat and back in polypropylene, characterizes the design of the '70s and becomes a cult object. Plia represents the realization of "democratic design" and is exhibited at the MoMA museum in New York. Thanks to this chair, of which millions of copies have been sold so far, Piretti, nicknamed the "Thonet of the 20th century", has entered the history of design.

Lightness, flexibility and technical precision are the obvious advantages of this design by Giancarlo Piretti. The folding mechanism of the Plia chair is new and innovative for its time. The chair rests on one of the metal discs that connect the back, legs and seat so that it can be folded into a compact flat shape just five centimeters thick.

The chair is also suitable for outdoor use, has rounded shapes, an oval insection tubular steel structure and transparent plastic surfaces. When folded, it can be hung on a wall hook made specifically for this purpose, but can also be stacked when folded.

Thanks to its simple structure and simple production, "Plia" can be produced at low cost and offered at equally advantageous prices. More than four million chairs have been sold since 1969.

In 1971, this exemplary project won the BIO 5 Lyublyana prize at the Biennale and the Gute Form prize of the Federal Republic of Germany in 1973.