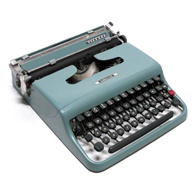 Lettera 22 is a typewriter designed by Marcello Nizzoli in collaboration with the engineer Giuseppe Beccio in 1950, produced by the Olivetti company of Ivrea.

It represents the first example of a portable typewriter, compact and easy to transport and manageable. Sold in a case with handle, first of cardboard and then leatherette.

The design of Nizzoli the "body" follows them volumes dictated by the functions of the keyboard and internal mechanisms, arrotondandosi on the perimeter, combining clean lines with a functional with a pleasant appearance.

Under the leadership of Adriano Olivetti, the fifties marked a phase of extraordinary growth for the company of Ivrea.

In 1938 Marcello Nizzoli, architect with a strong propensity for communication, capable of drawing with the same ease as creative products, buildings or posters, began a close collaboration with the design Olivetti. He was responsible for the design of many office products of great success: the Lexikon 80 (1948), the Divisumma 14 (1948), Letter 22 (1950), the Studio 44 (1952), the Divisumma 24 (1956), Letter 32 (1963). These models remain in production for over 15 years.

Olivetti leads the market for products destined to become true cult objects for beauty of design, but also for the technical quality and functional excellence, including the portable typewriter, Lettera 22.

In 1959, a jury of 100 designers promoted by the Illinois Institute of Technology chose Letter 22 designed by Nizzoli as the first of the 100 best design products made in the last 100 years.

Among the various awards ottien in 1956 the prestigiousCompasso d'Oro award given for this reason: "Is attributed to the typewriter Lettera 22 as an example of optimal solution for the needs of portability related to the type of object. The aesthetic of Nizzoli is solved here in a form that enhances the concept of portability consistent with the requirements of minimum footprint ".

Letter 22, is exhibited in the permanent design collection at the MoMA (Museum of Modern Art) in New York.