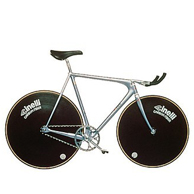 Cinelli Laser is a racing bicycle designed in 1981, a historical product of design and Made in Italy, an innovative and successful project in the history of cycling and cycling. A true design icon, he won the Compasso d'Oro in 1991.

Cinelli presents the first Laser, an aerodynamic bicycle developed to conquer speed records in vogue in those years, from the Hour record to the kilometer up to 100 km from the team time trial.
In the following ten years only 300 laser frames are produced of which over 100 are intended for professional athletes at the request of the national federations.

Characterized by the "fin" under the movement box, the fittings of the frame elements and the passage of the rear wheel obtained in the seat tube.

The Laser bicycle is known for innovative technical solutions that have become everyone's heritage. The first TIG welding of racing frames, (1979), the first structures in Chrome Molybdenum steel, as thin as a sheet of paper, the first frames with advanced bottom bracket (1982), the first monocoque in composite material (1984), the first full suspension from the street (1985).

The Laser Nuova Evoluzione, by Colombo and Erzegovesi, from 1991, identified with the name Laser Cinelli, created a new model of the track bicycle, opening the way to numerous technical solutions.

He wins 28 gold medals in the Olympics and World Championships. The Laser is exhibited at the Chicago Museum of Contemporary Art.

In 1978 Cino Cinelli, a former professional runner, passes the company to a young industrial leader in the steel tube sector, with a bicycle on his heart: Antonio Colombo.

The company is transformed and the inventions of "made in Cinelli design" begin to travel the world. The bicycle changes, or rather, the vision of the bicycle changes.
We talk about "total project", the Laser, abandons the conjunctions and introduces the Tig welds in the street frames.

The super-awarded chassis was the first with an aerodynamic profile built in steel.

In 1983 with the contribution of Andrea Pesenti, the profile of the drip tubes and the reinforced reinforcement gussets is created, with painstaking work to adapt the metal to the aerodynamic lines.