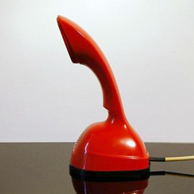 Designed by Swedish telephone company Ericsson in 1940, the Cobra Ericofon or phone, was originally designed for hospital use and is designed for ease of use.

In the late 1940s, Ericsson put together a design team, headed up by H G (Gosta) Thames, to come up with a new design for the telephone. The main purpose was to make the phone small, lightweight, and easy to use. After several prototypes, a design was settled upon and that one that went into production for the next 2 decades.

1954 marked the beginning of production for the Ericofon. Originally it was intended for institutional use. They found their biggest customers were hospitals. Imagine laying in a hospital bed, trying to reach over to a desk phone to dial. The one piece design of the Ericofon seemed to be "just what the doctor ordered".

Ericofon The phone is a product by the Swedish company Ericsson since the fifties, featuring a futuristic design with cutting edge technology for its time. The idea of â€‹â€‹this model began in the late '40s, when the development of plastics and miniaturization made plausible the idea of â€‹â€‹a telephone in a single block that accorpasse receiver, transmitter and dial numbers. The Ericsson arrived at a final model in the early fifties and marketed it since 1954, initially as a telephone for institutional purposes (offices, hospitals, public administration, postal services), then from 1956 for the public. The design of it is due to Gösta Thames.

Born to meet the criteria of economy and convenience, as often happens with some of those years Scandinavian design, the phone Ericofon soon distinguished himself for his forms. The highly plastic forms of this object have also decreed the ascent to cult object for collectors of modern art [citation needed]. It was produced and used virtually anywhere in the world, and that is why to this day is not considered a rarity, despite more than 50 years of life. In the U.S., who were its main market with Australia, was produced under license by subsidiary North Electric in Galion, Ohio, was produced in Sweden by the same LM Ericsson in Italy by FATME of Rome, while retaining the design of ' unit virtually unchanged; changed the plugs and the terms of the numbers in the hard switch, which also included American countries in the alphanumeric code while in Europe they only had numbers printed, and, in certain colors, the joint coupling of the two halves of the shell. Still on the subject of colors, the U.S. market against the proposed one twenty six in the European market.

The whole phone is strictly electro, except for the ring tone in some models, electronically (called Ericotone) and represents the first example of electronics applied to phone home. The other devices were equipped with hand buzzer. The whole body is made of two plastic shells glued die (early models) or from a single piece cast (in more modern) that houses the receiver and the microphone, the rest is screwed to the base, notable for the work of miniaturization of mechanical. The cable was typically of rubber covered with canvas, with the term near the outlet in a spiral.