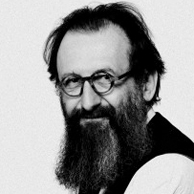 Michele De Lucchi was born in Ferrara in 1951, he studied in Padua and later at the University of Florence, graduating in 1975. Later he taught at the same Tuscan location.

In the years of radical and experimental architecture he has been part of movements such as Cavart, he fndato, Alchimia and Memphis where he comes into contact with figures like Sottsass, Branzi and Mendini. He designed for the Alchimia studio and in the eighties for Memphis, he was among the protagonists of the introduction of decorative geometric patterns on the plastic laminate used by Memphis.

In 1979, he was appointed as a consultant by Olivetti di Ivrea.

Michele De Lucchi has designed lamps and furnishing elements for the main Italian and European companies. He has developed experimental projects for Compaq Computers, Philips, Siemens and Vitra. He has also designed products for Artemide, Dada Cucine, Kartell, Matsushita, Mauser, Poltrona Frau, Olivetti for which he has been responsible for Design since 1992.

De Lucchi has also designed buildings for public and private museums.
Professional work has always been accompanied by personal research on the themes of design, design, technology and craftsmanship.

Michele De Lucchi is known for having designed the Tolomeo lamp produced by Artemide in 1987, with which besides being a great success, he was awarded the Compasso d'Oro in 1989.
Tolomeo is the most popular contemporary design lamp in the world and produced in all possible versions (from the ground, from the table, to spotlight, to suspension, to caliper, in reduced dimensions).

This project was very important, not only for its symbolic character, but for the definition of De Lucchi's professional life, so much so that it marked a turning point and defined a deep groove between everything that has been achieved before, and what will be realized after it.

In 1990, he founded Produzione Privata, a brand dedicated to the production of objects without commissioning and then took care of setting up exhibitions, for example at the Scuderie del Quirinale and rethinking museum spaces and libraries: he took care of the Palazzo delle Esposizioni in Rome, the restoration of the Museum of Design at the Triennale di Milano, of the libraries of San Giorgio in Poggiale (Bologna) and Lodi and of the Cini Foundation of Venice.

In 2001, he won the Compasso d'Oro with the Olivetti Artjet 10 printer, a company that nevertheless leaves De Lucchi the following year. In the same year, 2002 he taught at the IUAV of Venice, where in 2004 he became an ordinary professor, and from 2008, at the Polytechnic of Milan.

A selection of its products is exhibited in the most important museums in Europe, the United States and Japan.
In 2003 the Center Georges Pompidou in Paris acquired some of its products, on display for a year in two rooms of the permanent collection.

From 2005 begins an intense architectural planning and redevelopment activity in Georgia.

In 2009 he returned to take care of museum exhibitions, taking care of the Neues Museum in Berlin.

From December 2017, Michele de Lucchi is the new director of the Domus magazine, inaugurating a new cycle that sees ten important Italian architects for ten years at the direction of the architecture and design magazine, each of whom is entrusted with the management of ten issues up to 2028 to celebrate the magazine's 100-year activity.