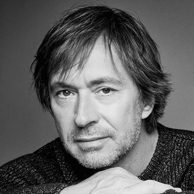 Marc Newson was born in Sydney, Australia, in 1963, known for the creation of household items, furniture and unique interior spaces made of unusual materials.

He attended the Sydney College of the Arts to study sculpture and jewelry.

After graduating, in 1986 he received a scholarship with which he organized an exhibition at the Roslyn Oxley Gallery in Sydney, where he exhibited his first creation, the Lockheed Lounge chair created to look like the modeling of a huge drop of mercury. Followed by various creations including chairs called Felt Chair and Orgone Lounge, Super Guppy (the name of a small South American fish) Light, and the Black Hole table (literally "black hole").

In 1990, the year produces Wicker Chair and Lounge, his works are exhibited in Milan by the Japanese company Kurosaki.

In 1992 he opened a studio in Paris. Draw then in 1993, the company lampda Helice for Flos, and some chairs for the company Moroso. This is followed by the drawing of the Seaslug wristwatch for the Ikepod manufacturer and the realization of the Coast restaurant furniture, which was opened in London in the United Kingdom in 1995.

In 1996, manufactures clothing for the company Walter Von Beirendonck.

In 1997, he moved to London, Marc Newson creates an assorted range of products for companies such as Magis, Flos, Cappellini and Alessi, and that creates spectacular bathroom products and kitchen.
Following the creation of unusual patterns of bicycle MN1, Falcon 900B, and Extravaganza. In Turin develops a hypothetical concept car bodywork imagined for a Ford that is performed Tokyo.

In 2001 he was fortunate to be able to expose some of their works on the premises of the Design Museum in London in the exhibition "Curates Conran Foundation Collection," organized and paid by the wealthy Sir Terence Conran.

In 2002 designs of seats for the airline Qantas, and produces excellent line of products for the very traditional bathroom manufacturer Ideal Standard.

In 2003, a work full of furniture for a bar at Lever House in New York, and draws the cookware for Tefal company.

In June 2019, the collaboration with Sir Jony Ive and the establishment of their independent company LoveFrom is announced.