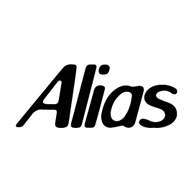 Alias â€‹â€‹collaborations with designers have developed over time, recognizing and revealing the particular talent of each designer, developed in a continuous exchange of ideas and a constantly open approach to the use of new materials and technological experimentation.

The solid industrial structure of Alias â€‹â€‹makes it possible to control every phase of the process, from design, production and distribution, with a network of around 1000 stores in 50 countries around the world.

All Alias â€‹â€‹products, with their minimalist and modern, highly expressive style, offer solutions to the various requirements of residential, contract and outdoor applications. A constantly evolving range of products to meet the needs of contemporary living and working environments.