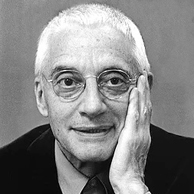 Alessandro Mendini was born in Milan in 1931. Architect, designer, painter, theorist and critic of design.

At the beginning of his career, working with Nizzoli Associati, he participated in the project for the Italsider of Taranto.

After a ten-year hiatus, the 70s, dedicated to journalism, resumed designing with the Alchimia group, whose gray eminence became.

He elaborates "redesign" objects, that is he takes classic design chairs and reinvents them with new colors and materials. The Universal chair by Joe Colombo is covered with imitation marble finishes, the Wassily chair by Marcel Breuer with colored and asymmetrical inserts and the Superleggera chair by Giò Ponti with signs.

Also for Alchimia are the Proust armchair, decorated with the pointillism technique, which is then re-proposed by Cappellini in 1993, the Kandissi sofa, the Scivolando chair, some models of the I "l mobile infinito" series.

He helped define Swatch's design physiognomy, as well as creating exclusive watch models for the company (1990 Cosmesis and Metroscape, Lots of Dots, 1991).

In 1983 he was director of design and communication for Alessi. He reset the entire production and contributed to it with the corkscrew Anna G. (1994).

He collaborates with industries, creates objects, furniture, interior design projects, and painting works. His work is also oriented towards sculpture. He was editor and editor of Casabella, Domus, and Modo magazines.

Numerous monographs on his work and on that accomplished with the Alchimia Atelier have been published in various languages. He is especially interested in neo-modern and contemporary design. He collaborates with international companies such as Alessi, Philips, Swaroski and Swatch.

He is a consultant of various industries for the solution of image and design problems.

Alessandro Mendini has received numerous international awards. In Italy he obtained three Compassi d'Oro (Italian industrial design award), in 1979, in 1981 with the Alchimia studio and in 2014 for the work of his career.

In 1989 he opened the Atelier Mendini in Milan with his brother Francesco.

Among the best-known design projects by Alessandro Mendini: