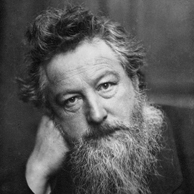 William Morris was born in March 1834 at Elm House, Walthamstow, near London in a wealthy family.

William Morris, despite himself, can be considered the father of Industrial Design (Industrial Design). Although strongly hostile to mass production, he was among the first to design decorative motifs for artisans and professionals.

Among the most famous works, the decoration of the Oxford Union Library through panels, tapestries and frescos with a medievalizing subject.

Morris's childhood was happy. From an early age, like many young gentlemen of the time, he has a great passion for everything that is medieval, devoting himself to such readings from an early age. Received as a gift from his father a pony and a miniature armor, in the character of a small knight errant, he sets off for long searches in the depths of the Epping forest.

A solitary child, only close to his sister Emma, â€‹â€‹from childhood he nourishes a romantic attachment to the woods and gardens, to flowers and birds which, together with his interest in mediaevalism, often recur later in his art and in his poetics for the rest of his life.

He attended the Marlborough College and the University of Oxford, where he knew the thought of John Ruskin and where he met Dante Gabriel Rossetti, Edward Burne-Jones, Ford Madox Brown and Philip Webb.

In 1859 he married Jane Burden who had been discovered by Dante Gabriel Rossetti who, struck by her beauty, asked her to pose for some paintings, becoming known as the model preferred by the Pre-Raphaelites, a brotherhood founded by Morris with friends from the university.

Of the general aesthetic doctrine, Morris above all embraced the rejection of industrial interference in decoration and architecture, advocating the return of craftsmanship and manual labor to give craftsmen back the status of artists. According to his philosophy, art should have been accessible to all, elaborated by hand and should not have found merit classifications. In other words, applied art should have enjoyed the same dignity as painting and sculpture.

In 1861, Morris founded the company Morris, Marshall, Faulkner & Co. with Rossetti, Burne-Jones, Madox Brown and Webb. Throughout his life he works on the projects of this company, which changes its name with the succession of members.

Encourages the rebirth of craftsmanship in its most traditional forms such as painting on glass and on wallpaper. The reasons he created are still a trademark, licensed, to the Sanderson and Sons and Liberty of London.

Contrary to mass production and the industrial revolution, Morris promotes the use of particular techniques, personally tested. For his fabrics he uses natural dyes and processes discovered in a book of the sixteenth century.

Among his most beautiful wallpapers, stands out Margherite, made in 1864 and mainly drawn from motifs found in medieval herbaria. Thus he combined love for the past and love for nature, both in clear contrast with the industrial revolution.