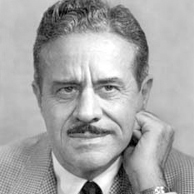 Raymond Loewy is a French designer, born in Paris on November 5, 1893, active mainly in the United States, which, with a European artistic taste and an American enterprising, has transformed the industrial design from art to a discipline of great economic interest.

Born and educated in Paris, he soon began working in the design field, creating a model aircraft that won the James Gordon Bennett Cup in 1908; the model then goes on sale with the name of Ayrel.
Loewy served in the French army in the First World War, and then moved to the United States at the end of the conflict in 1919.

He stops in New York, where he works as a window dresser for some department stores including the famous Macy's. At the same time he collaborates with newspapers and magazines, creating illustrations for Vogue and Harper's Bazaar.

In 1929, he obtained the first real commission of an industrial design work: modernizing a Gestetner mimeograph. Later he also worked for Westinghouse, he designed the bodywork for Hupp's Hupmobile and the Coldspot refrigerator at Sears-Roebuck.
Given the success, he opened a studio in London in the mid-thirties.

Raymond Loewy is considered "the father of industrial design" and is certainly one of the most influential designers of the twentieth century; with his work he left a mark in everyday life creating home appliances, means of transport, and successful graphic logos (logos) such as the Shell logo, the Greyhound bus, the S-1 locomotive, the cigarette pack Lucky Strike, the Coldspot refrigerator and the Studebaker Avanti car.

Loewy is one of the first to discover the link between design and business and explained this relationship by saying: "Between two identical products in terms of price, functionality and quality, the best-seller will be the best".
The thought of Raymond Loewy continues to inspire the world of design and is still in tune with the needs of industrial production.