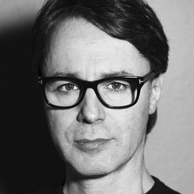 Luca Casini was born in Bologna, he graduated in architecture in Milan in 1996. In 1997 he opened his studio in Milan where he develops projects for office products, furnishing accessories, perfume packaging, accessories for the home and for the table, collaborates with Ritzenhoff, Atoma, Unilever, Newell and with Claudio Monti and Theo Williams for Technogym, designing the first spherical bottle in PET the same year.

He deepens his research on primary forms by designing a series of lamps for Dupont™ de Nemours in Corian exhibited at the “Labirinti di Luce” exhibition at the Palazzo dell'Arengario with the patronage of the Municipality of Milan and furniture for private collections.

In 1998 he founded with Jacob Pringiers, the industrial design studio CASINI & PRINGIERS Associates, active until 2004 in parallel with his personal studio activity, carrying out projects in many sectors, from boating to eyewear, from electronic products to jewelry, working for companies such as Luxottica Group, Riva Boats, BIC, Asa Selection and with other important industrial groups in Europe and the United States.

From 2000 to 2002 he teaches at the Politecnico di Milano. In 2002 Luca Casini designed the Babila curved glass shelves for Fiam Italia.
In 2003 he began his collaboration with Olivari on door handle projects, with Confalonieri designing accessories for furniture and with the Danish company Folle designing steel accessories for the home.

He designs for Elica, world leader in the sector, the innovative suspended kitchen hood "Lift" with perimeter suction, effectively launching a new type of product in this area.

In 2004 the “Planet” and “Madison” handles designed for Olivari were presented. Planet with its essential and minimalist shape remains for many years an important stylistic reference in the sector.
In 2005 he designed the 'T2' and 'T3' coffee tables for 'spHaus' and the exclusive 'Touch' armchair for 'Arcade Avec'.

In 2007 he was invited by Dupont™ De Nemours to the 40x40 event for the Dupont™ Corian® anniversary designing the bowl "Mirror" later auctioned by the Pierre Bergé Associés of Brussels; the same year he was awarded the "Baden -Wurttemberg International Design Award "for Auerhahn's" Pure "cutlery.

In 2009 he designed the "Flame" cutlery characterized by a fluid and slender shape for the German company WMF for which he had previously collaborated in the development of the "Sonic" cutlery (DesignPlus Award 2004 and also temporarily exhibited at the Museum of Applied Arts in Frankfurt).

In 2010 Casini Studio began collaborating with Fila S.p.A., with Freudenberg and with other multinationals on projects of electronic products and consumer products.
In 2009/2010 Luca Casini designs a limited edition collection of artistic furniture and in 2011 he collaborates with Maglital, designing the Cruciani C logo, product packaging and some iconic bracelets also in collaboration with Damiani, also painting an applied ceramic tile on the external wall of the historic Palazzo Comunale di Montalcino for the Consorzio del Vino Brunello di Montalcino.

In the following years he received various international awards including the "Red Dot Award" (five awards) and the "Good Design Award".

In 2014/2016 he developed the "Deframe" furniture collection for Daa Italia.
In 2016 the "Elements" corkscrew designed for Ritzenoff is selected for permanent display at the Vineum Bodensee Museum in Meersburg. In 2017 the Space Carving table / sculpture was exhibited at Palazzo Michiel on the occasion of the Venice Design exhibition curated by the Gaa Foundation in the context of the Venice Biennale of Art.

In 2017 he collaborated with Pedrali designing the "Fluxo" collection of tables presented at the Salone del Mobile 2018.
In 2019, the Diva handle, designed by Luca Casini for Olivari, goes into production. It is characterized by elegance, simplicity and clean lines.

Luca Casini uses the "CASINI STUDIO" brand for the development of more technical projects and consumer goods linked to the world of large international industry, operating in the sectors of electronics, health care, packaging and more generic industrial design in collaboration with the marketing offices of customers, while with its own name “Luca Casini Design Studio” it links its creative identity to collaborations on projects in the field of furnishings, furniture, home accessories, fashion accessories and luxury products.