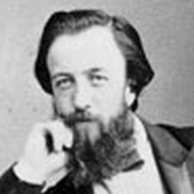 Christopher Dresser is a Scottish designer, among the greatest interpreters of the Arts and Crafts aesthetic movement, design theorist, and among the first to practice as a designer in a modern and independent.

It carries out the first studies in the field of botany and attended the Government School of Design in South Kensington, London (later to become the Royal College of Art), set up to provide designers with industry specific knowledge.

In this environment grows knowing and confronting designers and personalities that influenced greatly his time: Henry Cole, Richard Redgrave, and his mentor, Owen Jones.

In 1857 he sold his first creations, and writes the first theories on design, focusing on the relationship between botany and the art manufacturing.

Christopher Dresser is probably the first industrial designer in the modern sense of the word. He designed handicrafts of great boldness of expression, but also a vast number of household items, from wallpaper to furniture, from metal objects, ceramics, wood, glass and textiles.

In 1862, the public key work of his artistic thought, The Art of Decorative Design. Between 1876 and 1877 he traveled to Japan where, in rapprentanza the South Kensington Museum, and as an ambassador of the best British artistic production, was received with great honors by the emperor himself.

The Japanese influence, already present in Dresser, after traveling in the Far East marks its future production which becomes rigorous and essential forms, focusing on function and replicability.

Dresser is considered a father of design for both its theoretical and practical work, and has also been described as the first designer ever, having done the design work independently and with existing quality models and objects designed for mass production mass.

His style forerunner of the times has influenced generations of designers and proves its value resulting in some of its metal objects of daily use remains in production today.