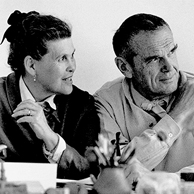 Charles Eames was born in 1907 in St. Louis (Missouri). He attends local schools and develops interest in engineering and architecture. After studying two years at Washington University in St. Louis from 1924 to 1926, he began working at an architecture firm.

In 1930, Charles opens his architecture studio. He receives a scholarship from the Cranbrook Academy of Art in Bloomfield Hills in the state of Michigan, where he becomes head of the design department.

There he meets Ray Kaiser, a designer whom he marries in 1942 and with whom he undertakes a human and professional partnership throughout his life.

In 1940, together with the architect and designer Eero Saarinen realized creation, which is a modern and innovative chair realized through the modeling of plywood, a competition organized by MOMA (Museum of Modern Art).

The product won two awards and attracts the attention of the manufacturer of furnishing items from Herman Miller.

The result is a partnership with the company with whom Charles and Ray Eames created a wide range of furniture designed to be mass produced.