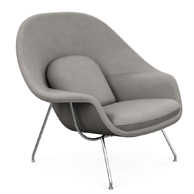 Eero Saarinen designs the revolutionary Womb Chair in 1948, following Florence Knoll's request for a chair as a "basket full of cushions", something where you can "curl up.

This international design classic of the 1950s, thanks to its shape and proportions, allows it to be used in various positions, always offering, as the name (womb - womb) suggests, tranquility and comfort.
"Today, more than ever, we need to relax," said Eero Saarinen in 1948 when the Womb chair was launched. A thought that could easily be applied even today.

Florence Knoll imagines for the first time the concept of welcoming, "a chair like a basket of cushions". To fulfill his vision, he turns to Eero Saarinen, whom he met when they both studied at the Cranbrook Academy of Arts in Michigan (United States).
Saarinen, at the time, was known for his studies on ergonomics and for having won in 1941, with Charles Eames, the organic design competition of the Museum of Modern Art, but also for their experiments with curved plywood.

For Saarinen, the behavior imagined by Knoll does not concern the padding but it is a question of form. Imagine a chair made of a single piece of material that would support those who sat on it with their perfect curves.

As with many Saarinen projects, the innovative idea requires research and use of new techniques and materials. This innovative approach to the project takes Saarien and Knoll from a boat builder in New Jersey to the unusual collaborator, the craftsman who works with fiberglass and resin.
After an initial skepticism he was persuaded and agreed to lend his nautical experience to the construction of furnishing elements.

The path to production was not easy for Knoll, who had to detect and solve a large number of problems and failures, before being able to build a chair that we know worked.

The perseverance of the Knoll-Saarinen couple is however rewarded. Since its launch, the Womb chair has always remained in production, for decades of popularity which confirm its status as a design icon, which also appeared alongside Santa Claus in a 1958 Coca-Cola advertisement.

Materials:
The seat shell is in molded fiberglass, covered with foam. The tubular steel legs, without welding, have a glossy chrome finish, shiny gold plating or black paint.
Upholstery in fabric or leather of different types and colors.