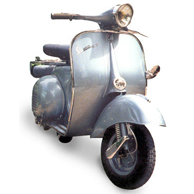 In April 1946, the Vespa was launched, the scooter for excellence, the most sold and most imitated worldwide. The engineer Corradino D'Ascanio, used in aeronautics, designed the Vespa with innovative features such as the bodywork, the front anterior monobraction and the direct transmission to the road.

Corradino D’Ascanio was invited to attend the MP5, named Paperino, former Vespa direct. The scooter, which has not been used by all of the Piaggio, has only produced 50 vehicles in ’43.

In 1945, a crucial historic moment for the Italian industry, it presented the opportunity for a far front on a large range of mobility with functional and economic products, to be realized in series on the part of the major industries. The problem of individual transport, security and low cost is central and Enrico Piaggio understands that the scooter can become the symbol of the race.

D’Ascanio's objective is to create a user-friendly, easy-to-use, easy-to-reach street that is straightforward and torturous, even though it has urban facilities but also a family home.

“I do not understand the motives of motorcycling, I think that the machine should serve them, like me, it is not a state of motorcycling and I would like its difficult guide. Stetti a rimuginare un po ’e una domenica mi venne l’idea base. The most important question was to be able to enter the vehicle comfortably, which results in the bicycle being given. Consider more comfortably and rationally the ‘seductive’ position that governs telaio; it is necessary to facilitate the maneuverability to the fullest.

Bisognava takes account of the impeccable citizenship of the vehicle, which, if necessary, can guide it without drawing the mani from the manubrio: on the manubrio misses the command of the change. Another thing: there is no need to park mani and pants, one of the most inconvenient wheels of the motorcycle. Then my motorcycle must have the covert engine, isolated by the guide: a unique complex with the rear window. Consequence of the transmission without a chain, with the transmission in a straight line in the group of motor vehicles. Another solution given by my aeronautical experience: the monotube support for the red anterior invece of the cyclone of original origin. E, first novel, introduced the bodywork eliminating the system and tubes.

Other requirements: the route of the score. Recording that many times, traveling in a car, have seen the margins of the street of motorcyclists in front of a camera mounted and mounted by the search, decisi, that on the basis of everything, a bus that should not cost a motorcyclist a mechanical problem . Volli that the motorcyclist has a ride in common with the motorist. Insomma is looking to build the machine that is most easily possible”.

Thus was born the MP6, the prototype of the Vespa 98 from 1945. Born as an Italian phenomenon, the scooter soon managed to interest all of Europe and subsequently to establish itself in the rest of the world. Over the years Piaggio has remained fairly faithful to those solutions that made it successful and this demonstrates that D'Ascanio with the Vespa 98 developed a project that offers no alternatives.

Even in the ultimate version (ET2 and ET4 of 1996) the traditional structure of the bodywork is maintained: scudo, pedana, central longherone, lateral scocche. The engine, located in a central position, meets the criteria of consumption economy and the respect of emissions. Electronics interviewed significantly, the balance is robotic but the general concessions are the same, in contrast to the strategy of other scooter manufacturers, in prevalence giapponesi.

The Vespa continues to carry a model of manual maneuvering (for example, the lamella can be varnished or scraped), which can respond to a total logic of recovery with a piece of waste.