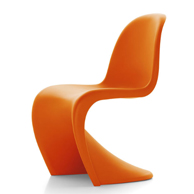 Verner Panton is one of the most influential figures for the development of design in the '60s and' 70s. Together with his experimental approach to shapes and the use of colors, he is fascinated by the potential of plastic, a new material for that time.

Its purpose is to create a comfortable chair, made in one piece that could be used anywhere. After looking for a producer for several years, Panton came into contact with Vitra in 1963. Together they developed the Panton Chair, presented for the first time in 1967.

The idea of â€‹â€‹designing a stackable plastic chair was expressed for the first time by Ludwig Mies van der Rohe before the Second World War.
From the early '50s also Verner Panton had dreamed of creating a stackable plastic chair, all in one piece.
In 1956 he designed the S Chair, considered a precursor of the Panton Chair. A piece of furniture in which the back, seat and legs are made in one continuous piece.

Panton has created a series of sketches and design drawings for the Panton Chair in the 50s. In 1960, he created his first model, a plaster cast, in collaboration with Dansk Akrylteknik.

In the mid-60s he met Willi Fehlbaum of furniture manufacturer Vitra who is fascinated by the drawings of the chair without legs in plastic.

Working closely with Fehlbaum, Panton produced a cold-pressed model with glass-fiber reinforced polyester. For the first time, an entire chair is designed and built in one piece, without legs.

In 1979, however, production is interrupted because it becomes clear that the material used was not sufficiently resistant.

Four years later, the model was again produced as a Panton Chair Classic.

Panton Chair (initially known as Panton's S Chair) has been exhibited extensively in Denmark and abroad. It is currently part of the permanent collections of some of the world's most famous design museums, including the MoMA Museum of Modern Art in New York, the Design Museum in London, the German Historical Museum in Berlin and the Danish Museum of Art & Design in Copenhagen.