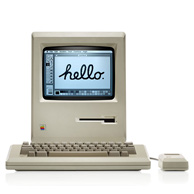 The Macintosh 128K (Mac), is a personal computer marketed by Apple Computer from January 1984 to October 1985. Initially it does not have a model number, simply the Macintosh. After the introduction of the Macintosh 512K (the same computer with the RAM of 512 KB), to distinguish it from the latter was renamed Macintosh 128K.

From the first Macintosh derive various models of personal computers commonly referred to as classic Macintosh. The Macintosh is the forefather of the homonymous family of machines still sold today. At the time, considered a revolutionary product, it changed the computer world making the use of the personal computer easy and intuitive thanks to the innovative graphic interface that inspired other systems such as Windows.

The choice of the name "Macintosh" is by Jef Raskin, interface expert and developer of the project, who called it the computer because of the brand of his favorite apples, the McIntosh.

The project begins in 1979, when Jef Raskin gets the direction of Annie (later renamed Macintosh), a small development division inside Apple, parallel to that of Lisa. Raskin wants to create a small, cheap computer, with a 5 "display, to sell for less than $ 1,000.

To limit costs, the Motorola 6809 microprocessor was chosen. In 1980, Steve Jobs, recently ousted by the Lisa development team, began to take an interest in the Macintosh. It requires the use of the Motorola 68000 processor, more powerful than the previous one and necessary to support the graphical interface.

The clash between Raskin, who wants to make an economic product and Jobs who does not want to give up the quality to contain costs is inevitable. In 1981 Apple CEO Michael Scott entrusted the Macintosh division to Jobs.

Steve Jobs expands the working team that moves to a new location, in the building renamed "Texaco Towers", because close to a Texaco distributor and because previously the development group of Lisa had moved to a building called "Taco Towers" ".

During the design Jobs works to improve the design, engaging in the details that few would have noticed, like the internal components. This obsessive attention to detail contributes to the creation of his myth but also to the success of the products he designed.

According to the initial Raskin project, the computer should have developed horizontally, with the keypad closing at the front of the door, to simplify transport. At Jobs the solution does not like, in early 1981 recruits Jerry Manock, industrial designer, with whom he develops the solution with the vertical body and the integrated video.
The long and articulated development process sees Jobs engaged in continuous changes, with the first real prototype, based on the final design, completed at the beginning of 1982.

The computer had to be commercialized in 1983 but due to the numerous hardware and software problems the deadline is postponed. During development, it is understood that the competitor of the Macintosh will not be the Lisa but the IBM PC, which was establishing itself on the market.
To counter IBM, Macintosh is reviewed in the process, comes with 128 KB of RAM and replaces the 5 "¼ floppy disk with the new and larger 3" ½ units produced by Sony.
The computer, completed in mid-1983, was presented in January 1984.

Approaching the commercialization begins the debate on the selling price. The computer in Raskin's plans had to cost around $ 500 but then the price is set at around $ 1,000.
The choice of basing the system on a graphical interface forces to increase the memory of the computer in order to manage the video buffer, doubling the RAM, from 64 to 128 KB.

The adoption of the Sony 3.5 "floppy drive also leads to higher costs, with all the changes making the costs rise and the estimate of the sale price rises to $ 1,995.
Apple's CEO, John Sculley, imposes, despite Jobs' resistance, a Macintosh sales price of $ 2,495 to get $ 500 additional to finance a large Macintosh advertising campaign.

In the spring of 1983 Jobs began to think about the marketing campaign for the launch of the Mac. The project is entrusted to the agency Chiat / Day, which creates a 60-second ad based on the slogan "Why 1984 will not be like 1984" in reference to the novel by George Orwell.

The film, shot by Ridley Scott and directed by Lee Clow focuses on a girl with the silhouette of a Macintosh drawn on the shirt in order to free humanity from the control of Big Brother.

In the idea of â€‹â€‹Jobs Apple was represented as the only force left able to counter the dominance of IBM in the computer world.
Despite the initial hostility of the board of directors Jobs, helped by Mike Murray, Apple's marketing manager, he managed to broadcast the spot, aired before the start of the third quarter of the XVIII Superbowl. The success is enormous, so much so that it is defined by both Advertising Age and TV Guide, as the best advertising film of all time.

The official launch of the Macintosh is set for January 24, 1984, the same day of the company's shareholders' meeting, at the Flint auditorium of De Anza Community College.
The event is a success. Jobs takes a briefcase over a column placed at the center of the stage and a specially written program is run on the Mac to show the graphic and sound potential of the computer.

To make it easier for the public to see the images generated by the computer are replicated on a large screen behind Steve Jobs, while in the background is spread "Chariots of Fire", the soundtrack of the film Momenti di Gloria.

It is the same Mac, at the beginning of the presentation, to greet the public thanks to the voice synthesized with the famous words: Hello, I am Macintosh. It sure is great to get out of that bag!