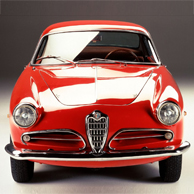 The Alfa Romeo Giulietta Sprint, later renamed "Giulia Sprint", is a sports car produced by the Italian car manufacturer Alfa Romeo from 1954 to 1965.

The Alfa Romeo Giulietta Sprint is a coupe designed by Bertone with 2 doors and a front mounted engine that transmits power through the rear wheels. The Alfa Romeo

The design and development of the coupe had been completed jointly with the sedan and in the early months of 1953, the prototype of the future "Sprint" was made by Giuseppe Scarnati.

Following a series of difficulties with several car manufacturers, the head of the "Giulietta project", Rudolf Hruska, asks for help from Mario Boano, head of Ghia and Nuccio Bertone.

Hruska also enrolled Giovanni Michelotti as Alfa Romeo consultant for the evaluation of the stylistic solutions proposed. Franco Scaglione and a very young Giorgetto Giugiaro also worked on the refinement work, mainly carried out by Boano.
The three brought a myriad of changes that, while maintaining the original setting of the volumes, made the body stylistically pleasing and balanced in every part.

This is how the Giulietta Sprint was born, presented as a prototype for the pre-series at the Salone dell'automobile di Torino (Turin Motor Show) on 19 March 1954. In reality, the proposed models were two, one of red and one of blue, different in many details, but that even had the tailgate openable, a real novelty for the time.

This solution was then abandoned for mass production, as water infiltrations were feared, due to the low inclination of the rear window area and the precarious sealing of the gaskets of the period.

The success of the new model was such that Alfa Romeo had to immediately revise its production programs that included a minimum of 100 and a maximum of 200 specimens per year. Already at the end of the first day of opening of the show, in fact, the orders exceeded 500 copies.

Alfa has built over 130,000 Giulette in over ten years of production, a great success for the Italian company and has contributed to its fame. A very advanced mass-produced car that married an innovative alloy engine with elegant bodywork, the Giulietta was one of the fastest cars in its class and was to be the flagship Alfa for decades.

The power is produced by a double overhead camshaft, a 1.3-liter aspirated 4-liter engine, with 2 valves per cylinder that produces torque and power values â€‹â€‹of 79 hp at 6000 rpm.