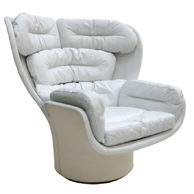 The Elda armchair was designed by Joe Colombo in 1963, produced since 1965 by Comfort Italy and later by Longhi. It is named after his wife.

Historic piece by the Milanese designer, Elda it is part of that series of Italian products from the 60s and 70s that marked the history of design and made "Made in Italy" famous throughout the world.

The Elda armchair is an example of Joe Colombo's visionary creativity, the innovative and futuristic design for his time (sixties) is one of the historical pieces of Italian design and Made in Italy.

Elda is one of the first products made by Joe Colombo, which went into production in 1965 by the Italian Comfort company and later by Longhi.

Elda is a piece of furniture built in plastic material reinforced with fiberglass. Colombo abandoned the use of wood for the construction of the shell, which until then had been used in most of the armchairs. It is inspired by boat building technology to obtain a light and resistant structure.

The shell rotates on a 360 ° swivel base, which allows great mobility and orientation of the chair. The shell is produced in two versions, white or black.
The internal upholstery and the cushions are in leather, with different color combinations.

The anatomical padding in polyurethane foam of different thicknesses, with Dacron covering. Given the particular type of processing, the upholstery is not removable.

Joe Colombo believes in the future and in technology, he designs modern objects that are ahead of the times. Elda is an example of this "futuristic vision", so much so that it was chosen as a stage element for Spazio 1999 (British science fiction television series created in 1973).