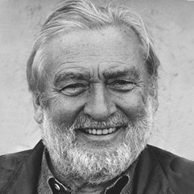 Verner Panton born in Gamtofte in 1926 in Denmark, is a figure of great importance in the world of modern design and Scandinavian design.

In 1944 he enrolled at the polytechnic and moved to Odense, on the island of Fünen, where he took part in the Danish resistance against the occupation of Germany.

In 1947 he enrolled in a degree program in architecture at the Academy of Copenhagen, and in 1950 began to work assisting the famous architect Arne Jacobsen in the design of the Ant chair.

In 1955 he opened his own design studio and created his first articles of furniture for mass production, the Tivoli Chair and Bachelor calls it, in the same year, are produced and launched by the company Fritz Hansen.

In 1958 he opened the Komigen restaurant that Verner Panton designed for his parents, owners and managers of a hotel. The design that includes the use of Cone chairs, created specifically for this purpose, is a huge success.

In 1960 Verner Panton designs one of its articles of greater importance in both stylistic of technological evolution: the series of Stacking chairs produced by plastic molding ignezione known to be the first that was realized by the use of a single mold.

That same year a collection of inflatable chairs, and their design Astoria Hotel in Norway. This project puts into practice the technique of "total environment" in the use of a consistent style carrier for the decoration of walls, floors and ceilings of the same local local. Then use this technique on several other installations (including the one for the exhibition of Cologne Watch II).

In 1961 his works were published in the Danish magazine of furniture Mobilia.

In 1964 creates the seductive collections Flying Chairs and Shell Lamps that will arouse a great interest when the exhibition will be presented Cologne Furniture Fair.

In 1965 creates the original S Chair in molded plywood, and based on the design of the chair stacking.

In 1967 he designed Panton Chair, one of the symbolic pieces of the Danish designer, the first product developed independently by Vitra.

In 1969, Verner Panton's extraordinary creation called Living Tower was launched consisting of a solid soft to the touch inside which you can sit in various positions. In the same year Verner Panton completed the interior design of the general offices of Der Spiegel magazine in Hamburg.

In 1970 he made the Visiona II exhibition for the Bayer cosmetic, pharmaceutical and pharmaceutical company in Cologne. The design consisted of a beautiful installation based on the principle that had already used for the creation of the apparatus in combination with the principle Living Tower "total environment" (previously used in interior design Astoria hotel in Norway), all applied to a wide surface. In 1973, again under the same stylistic lines, outlined the interior of the newspaper offices Grüner & Jahr in Hamburg.

In 1990 the house Herman Miller-Vitra produces a second edition of the Panton chair. In 1994, the furnishing superstore IKEA prodocono a large number of articles Vilbert, series of chairs made of molded plywood entered for the first time on the market in 1954.

In 1995, the Panton Chair appears on the cover of British version of fashion magazine Vogue.