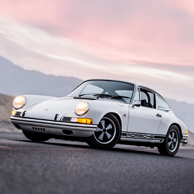 The Porsche 911 has a curious history starting from the name, now a universal symbol, which was supposed to be 901. A few months after the presentation at the Frankfurt Motor Show in 1963, the top management are forced to change their name to 911, because Peugeot had recorded all the three-digit codes with the "zero" (0) in between.

The design of the new car is the work of Ferry Porsche for the technical part and his son Ferdinand Alexander Porsche (nicknamed "Butzi") for design and stylistic innovation.

The guidelines entail the maintenance of the technical-stylistic approach of the "356", with a rear air-cooled boxer engine, but sufficient roominess to accommodate 4 people. In fact, the rear seats are not comfortable and that's why the Porsche 911 is called a 2 + 2.

For the definition of the bodywork, the proposal of Ferdinand Alexander Porsche at the end of 1959 originates from the prototype "T7" (later also called "754") but does not convince and the various modifications do not represent the right compromise between the elegance of the appearance and the need to get space for passengers in the rear seats.

A long work of refinement leads to disparate and bizarre solutions, until Butzi is forced to abandon the initial 4-point programmatic point and fall back on the 2 + 2 configuration, which allowed to maintain the initial belt line, connecting the pavilion with the bonnet engine in a single curve.
The same stylistic solution was adopted in 1960 by Franco Scaglione for the "356 Carrera Abarth" which, together with the "T7", can be considered the progenitor of the future "911".

The series construction of the car would have allowed Porsche to enter the "two liter" Grand Touring market, with a competitive price compared to the models handcrafted by many Italian coachbuilders, on Alfa Romeo, Fiat and Lancia cars.

It is not just the design that decrees the success of the car, but also the technical solutions adopted. The history of the Porsche 911 is firmly linked to the decision to adopt an air-cooled 6-cylinder boxer engine, mounted on the rear axle with a displacement of 2 liters.

The success of the Porsche 911 is immediate and after only 3 years since its launch in 1966, the Stuttgart-based company makes the 911 S debut on the market, which stands out from the eldest for an increase in engine power up to 160 horsepower and for the rims in Fuchs alloy. On all models we switch to Weber carburetors.

The following year, the Porsche 911 R was built, produced in just 20 units, featuring a 210-horsepower Twin Spark engine and weight reduction for the use of aluminum doors and magnesium crankcases.

The Porsche 911 entered history thanks to the Targa version. Presented in 1965, this version is characterized by the presence of the fixed roll bar that allows you to easily remove the roof and get a cabrio version.

In 1972 the 911 Carrera RS (RennSport) was born, with the classic 6-cylinder boxer (210 bhp) and lightened body, with bonnets and aluminum doors. The Carrera RS Touring version with an interior similar to that of the 911 S and Sport, has a simplified internal set-up to further reduce weight.

In 1973 eight racing specimens were made called 911 Carrera RSR. These models, entrusted to the Brumos and Penske teams, compete in some tests of the World Championship for sports cars. At the first race in the 24 Hours of Daytona, riders Peter Gregg and Hurley Haywood of the Brumos team get the victory. Other successes are added with the conquest of the Targa Florio and the 12 Hours of Sebring.

In 1975 the 911 Turbo or Turbo Carrera was born, equipped with a 2994 cm³ engine with mechanical injection and supercharged turbocharger. The developed power is 260 hp.

In 1983, the coupe and plate versions were joined by the 3.0 SC Cabriolet, the first 911 with a full-opening canvas roof.

In 1984 the 911 SC gave way to the 911 Carrera 3.2, almost unchanged aesthetically, takes the name "Carrera" and reserves important technical innovations in the mechanical part: displacement brought to 3164 cm³, fuel injection instead of mechanical and power of 231 hp. The 911 Carrera 3.2 is produced in a coupé, plate and convertible version until 1989.

The 911 series with air-cooled engine closed production in 1997.