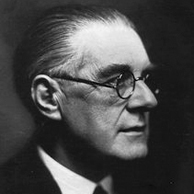 Peter Behrens was born in Hamburg (Germany) in 1869, studied painting from 1886 to 1889 at the Karlsruhe School of Art in Düsseldorf in 1889, privately, with Ferdinand Brutt.

In 1890 he visited the Netherlands before settling in Germany, Monaco.

Member of the secession of Monaco is part of the radical artists of the time. In 1897, after a visit to Italy, is one of the founders of "Munich Vereinigte Werkstätten".

In 1898 he devoted himself to the design and the following years became interested in graphic design and typography, creating a new set of typefaces known as "write-Behrens."
From 1899 to 1903 taught at the newly founded colony of artists in Darmstadt thanks to the Grand Duke Ernest Louis of Hesse.

The 1901 is the year of its passage to the applied arts: painting and end his involvement began his career as an architect.
In Darmstadt he made his first house (House Behrens) for the exhibition "Ein deutscher Kunst Dokument" where he designed the structure to every piece of furniture.

In 1906 he was commissioned to design the promotional material for Emil Rathenau's AEG, the largest power company in Berlin, where he was employed as a designer Messel Adolf and Otto Eckmann.

In 1907, called by Paul Jordan, CEO dell'Allgemeine Elektricitäts Gesellschaft (AEG), became the architect and artistic consultant for the AEG in Berlin, with tasks ranging from the design of the letterhead and industrial products to architectural design. She remained there until 1914. For A.E.G. designed the first logo socetario, and uses it to A.E.G.

Peter Behrens was not only the father of German industrial design - he was also the founder of corporate identity. Working for AEG, Behrens was the first person to create logos, advertising material, and company publications with a consistent, unified design.

From advertising art his work is thus transformed in the creation of company image. This marks the birth of "corporate identity" (corporate image). Behrens is the pioneer of this concept and put it into practice.

His long relationship with W. Rathenau, as well as allow them to carry out a great extent, places him at the forefront of the process of ideological renewal of the role of architects and designers in modern society.

In 1921 he taught at the Düsseldorf Academy (where he stayed for only one year).

From 1922 to 1936 Behrens heads the architectural section of the Academy of Vienna, from 1936 until his death in 1940, directs the Department of Architecture at the Prussian Academy in Berlin.

In the transition from painting to design and architecture you, Behrens follows an evolution in which abandons the classical language on which he based his ideas of the industrial culture to land Expressionism and, finally, to Rationalism with its latest production.