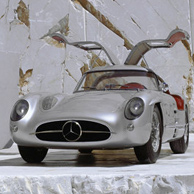 The Mercedes-Benz 300 SL reaffirms the class and elegance of the cars of the German house and their weight in sports competitions.
Another important factor of the 300 SL is that it is the progenitor of a series of luxury sports cars marked with the abbreviation SL, an abbreviation that stands for Sport Leicht, or Sport Light.

The W194 300SL was built around a tubular chassis to compensate for its relatively underpowered carburetor engine. Designed by the developing engineer director Daimler-Benz, Rudolf Uhlenhaut, the metal frame saves weight while ensuring a high level of strength.
Its unique architecture gave birth to the "gull-wing doors" characteristics of this model.

Over 80% of the vehicle's production of around 1400 units was sold in the United States, making the W194 300SL the first Mercedes-Benz to be sold the most outside the domestic market, confirming the validity of Hoffman's proposal.

In 1957 the 300 SL Roadster (W198 II) was produced, different from the coupé in many respects. The most evident in the bodywork, with traditional opening doors, made possible by a modification to the tubular trellis frame, strengthened by pipes placed between the transmission tunnel area and the part relating to the tail to maintain torsional rigidity despite the absence of the roof.
Aesthetically, the Roadster is also different in the front where you can see the new vertically developed headlights that distinguish it from the smaller 190 SL.

The Mercedes-Benz 300 SLR represents an exception in the racing history of the German brand and is based in part on the technology of the winning cars of the 1955 World Championship.

The 300 SLR is designed for the 1954 season and the company enters the race for the 24 hours of Le Mans, but has to withdraw because the car was not ready.
In September 1954 a prototype runs on the track in Monza for tests, with a dry weight of 860 kg, including two spare wheels in its luggage compartment.

The silvery racing Roadster is a high-end product, "sturdy like a tank, but as agile as a jungle cat", as the driver John Fitch explains in his autobiography 'Racing with Mercedes'.