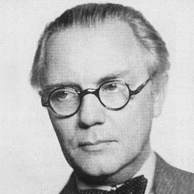 Erik Gunnar Asplund, born in Stockholm in 1885, was a Swedish architect, mostly known as a key representative of the Nordic classicism of the 1920s.

He studied architecture at the Royal Institute of Technology in Stockholm. After completing his studies, he worked for Asplund Tengrom architects, Westman and Ostberg. He completed his architectural training, with long journeys through Sweden and other parts of Europe. Asplund worked alone and obtained a large amount of his work through contests.

Asplund has been a professor of architecture at the Royal Institute of Technology since 1931. His appointment was marked by a conference, later published under the title "Our architectural concept of space.

Gunnar Asplund is considered perhaps the most important Swedish modernist architect and has had a great influence on successive generations of Swedish and Nordic architects.

Among the most important works of Asplund is the Stockholm public library, built between 1924 and 1928, which represents the prototype example of Nordic classicism and the so-called Swedish grace movement.

Another important work is the expansion of the Gothenburg Courthouse Extension, begun in 1913 by Asplund and completed in 1937, which shows its transformation from neoclassical to functionalist architecture, a transformation in parallel with other European modernists such as Erich Mendelsohn.

During the period from 1931 until his death, Asplund moved away from Modernism and began to show sympathy towards a stripped Nordic classicism. Asplund continued to draw until his death in Stockholm in 1940.