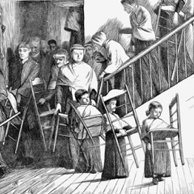 The Shakers are a religious group which specializes in design that it operates in producing handmade furniture, structures, furniture, containers, baskets, textiles and weaving machinery.

Also called by the name of United Society of Believers in Christ's Second Appearing (Those who believe in a second appearance of Christ), between Community companies established in the United States during the period of 1700 of 1800, is one of the most successful.

The Shakers strasferirono in America from the English city of Manchester in 1774 under the directions Ann Lee, founder of the movement. In upstate New York near the Albany County began to establish the foundations for the practice of a religious scheme which played its activities with full penalties for 220 years. Today one of their communities remains at Sabbathday Lake in the Main, where he continues to pursue his activities handcrafted design.

Since their arrival in America, the Shakers were noted by many locals who chose to convert to their religion attracted by the way Ann Lee preached his relationship with God, and chose to meet in community bound together by their shared faith and by ' commitment to honesty, all'ugualianza equality, and good human relations. In 1830 the Shakers had expanded significantly by establishing communities in Massachusetts, New Hampshire, Kentucky, Maine, Ohio, and Indiana reaching the highest popularity in 1850.

Ann Lee, called Mother Anna, whose position included the temporal and spiritual power, was the prophet of the spirit of Christ and foresaw a future reincarnation. Brothers and Sisters of the Shaker Community, carrying on their work under his direction, through their work they proposed to create an artistic vision of earthly paradise. One of his disciples said to one day build a chair in which he imagined to create it because one angelic figure could sit.

From its achievements caratterizate Shakers are the creativity, the accuracy and simplicity of the lines. Their buildings were made with great professionalism and had modern and efficient plants in a design that emphasizes function and style. The creativity and professionalism of the Shakers, supported by the use of advanced technology gave rise to a wide range of high quality innovative products, which besides being used within the group, were successfully sold outside the community.

In the process of creating a piece of furniture craftsmen used the experience and observation to produce decorative and functional solutions. Developing an approach to complex design problems considered by a number of alternative routes and their expectations from the objective of satisfying customer demands. On these lines the Shaker communities created products that reflect your style and the company where she worked.