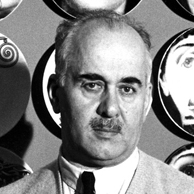 Piero Fornasetti was born in Milan in a bourgeoisie family, in 1913.
Painter, sculptor, interior decorator, printer of art books, designer and creator of objects, sets and costumes, organizer of exhibitions and initiatives.

Born in a family of Milanese bourgeoisie. In 1930 he entered the Academy of Fine Arts of Brera, but was expelled for insubordination. He enrolled at the School of Applied Arts Industry of the Castello Sforzesco in Milan.
He has created one of the largest productions of objects and furniture of the twentieth century with great variety of decors.

The lesson of Fornasetti's work lies in its rigor, combined with great imagination and a thin vein of humor.

In 1933 Fornasetti begins attendance at the Milan Triennale, with a series of printed silk scarves.
In 1940 (VII Triennale) met Gio Ponti is born with a time of collaboration. Publish their works on the design and architecture magazine Domus and Stile.
1940 to '42 draws lunar commissioned by Gio Ponti himself.

From 1943 to 1946 he took refuge in Switzerland where he made posters and lithographs for theatrical events and magazines.
In 1970 he directs, along with friends, of Bibliophiles gallery, where he exhibited both its production and that of contemporary artists.
After the death of Gio Ponti (in 1979), he opened the shop "Theme and Variations" in London, which creates interest in their work abroad where it was already known.

After the death of Piero, in October 1988, his son Barnaba Fornasetti continues part of the father.