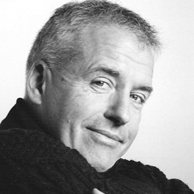 Marc Sadler, born in 1946 in Innsbrück, Austria, is a French citizen, lives and works in Italy, in Milan, as a designer, specializing in plastics and their processing technologies.

Graduated from 'E.N.S.A.D.' (École nationale supérieure des Arts Décoratifs) in Paris, won the 'Brook Stevens' international design competition in 1967.
Between 1968 and 1974 he continued his apprenticeship in France and began working on industrial design projects for French companies in various sectors.

In 1968 he was a member of Design Center 1 in Paris, the first design group in France. In 1969 he founded Design Deco in the south of France.

In 1970, he joined the Design France group and continued his specialization in plastic products.

He designs products from various sectors, demonstrating the ability to assimilate the different production technologies according to the different requests. In 1971 he began designing plastic ski boots for Caber in Italy.

Marc Sadler spend long periods on business in Italy. He opens a studio, with a CAD system and three-dimensional modeler in Asolo, then in Venice and then settles in Milan.

After years dedicated to the design of sports and industrial sectors, the business expands with the design of furniture. Also active in the field of teaching, he holds conferences and seminars in design schools and universities in Italy and abroad (Domus Academy, Politecnico di Milano, etc.).

Receives various prizes and awards such as the DESIGN PLUS in Frankfurt (1995), the Compasso d'Oro for the soft fall lamp designed for Flos-Arteluce (1995), the Auszeichnung FUR Gutes Design Industrie Forum Design in Hannover for Drop 2 (1996 ) wall light.

In January 1997 he was elected Créateur de l'anee at the Salon du Meuble in Paris.