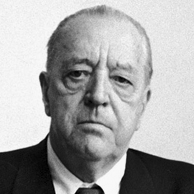 Ludwig Mies van der Rohe was born in Aachen (Germany) on March 27, 1886. He lives between the Europe of the avant-garde and the America of modernity and skyscrapers, where he took refuge in 1938.

Son of a stonemason, he attended an Arts and Crafts course, working with local artisans, developing a great ability in freehand drawing. He trained by working in his father's workshop and later devoted himself to the technical and industrial design of stucco ornaments for a local architectural studio.

In 1905, he moved to Berlin and studied under Bruno Paul (Art Nouveau architect and furniture designer), worked as a furniture designer and attended the Academy of Fine Arts. In 1908, Mies joined Peter Behrens' architecture firm until to 1911. Here he worked alongside Gropius and for a short time with Le Corbusier.

Leaving Behrens in 1912, he married Ada Bruhn, with whom he had three daughters Dorothea, Marianne and Waltraut. The family moved to Berlin where they opened their own studio the following year. He devotes himself to theoretical research, writes for important avant-garde magazines and is the author of manifesto projects. He established himself as one of the main personalities of his field and became one of the teachers of the Bauhaus together with Gropius, Klee and Kandinsky.

In 1919, he was a member of the revolutionary Novembergruppe, an association of artists where he elaborated a series of projects never realized, which made him famous, such as the first glass skyscrapers, promoting Modernism through his architectural proposals.

Mies van der Rohe collaborates with the magazine "G. Material fur elementare Gestaltung", born in 1923. He develops his contributions to the architectural philosophy of the late twenties and thirties as artistic director of the Weissenhof project, sponsored by the Deutscher Werkbund and as director of the Bauhaus .

From 1926 to 1932 he was vice president of the Deutscher Werkbund where he organized important exhibitions, including that at the experimental Weissenhoff district in Stuttgart in 1927. He invited the best European architects to participate in the construction of a model district.

From 1930 to 1933 he was the last director of the Bauhaus school. The Nazi government declares hostility towards the Bauhaus programs and Mies is forced to close the school and leave Europe.

In 1931, he exhibited at the Berlin Buildning Exhibition and granted Thonet-Mundus the exclusive rights for the production of his chairs.

He designs a series of important buildings such as the Seagram in New York and the Cullinam Museum in Houston and the Neue Nationalgalerie in Berlin.

Known for its motto "less is more", Mies creates neutral spaces of architecture based on material honesty and structural integrity. In the last twenty years of his life he reached his vision of a monumental architecture "skin and bones".

In the 1940s, he began the project for a new campus for the ITT (Illinois Institute of Technology), a project where he perfected his style, consolidated himself professionally and designed his most famous buildings.

From 1945 to 1951, Mies van der Rohe built Farnsworth House for Edith Farnsworth, a wealthy Chicago doctor. The house is a transparent box, framed by eight steel columns. It represents one of the most radically minimalist interventions ever designed, the first house built by Mies in the United States.

In 1947 the MoMA (Museum of Modern Art) in New York dedicates a personal exhibition to him which contributes to increasing his fame.

The Chicago 'twin towers' were completed in 1951, followed by other skyscrapers in Chicago, New York, Detroit, Toronto. Mies van der Rohe designs and builds many tall buildings in Chicago and elsewhere. These include the Federal Building (1959), the IBM Building (1966) and 860-880 Lake Shore Drive (1948-52).

In 1958 he realized his dream, to build a glass skyscraper, what is considered the highest expression of the International Style of architecture, the Seagram Building, in New York. A large glass building, with a large square with a fountain in front of the structure, creating an open space towards Park Avenue.

In 1959, he received the Orden Pour le Mérite to career (in Germany) and in 1963 the Presidential Medal of Freedom (in the United States).

Among his latest works, in 1962, he was invited to design the 'New National Gallery' in Berlin, now elderly and ill. The Neue Nationalgalerie is the most grandiose and tragic work of Mies van der Rhoe: a square classroom of almost sixty-five meters on each side with a roof that rests only on eight steel pillars, consecrates the figure to a timeless classic architecture , comparable to that of Greek temples.

He returns several times to Berlin to follow the work of the national gallery, but cannot attend its inauguration in 1968.