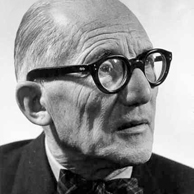 Le Corbusier (pseudonym of Charles-Édouard Jeanneret-Gris) was born in Switzerland on 6 October 1887 in La Chaux-de-Fonds from his father Georges-Edouard Jeanneret-Gris and his mother Charlotte Marie Amélie Perret. The first watch decorator, the second musician and piano teacher.

After primary school, Charl-Edouard (Le Corbusier) was enrolled in the La Chaux-de-Fonds School of Art to be trained as a clock decorator and to follow the family tradition.

One of his teachers, Charles L'Eplattenier, realizing that the artisan profession of watch decorator did not represent an adequate path for his students, directs Le Corbusier to the study and practice of architecture.

In 1906 he made his debut with the construction of the Fallet villa, which he built in his native city. In 1917 he moved to Paris.

In 1920, at the age of 33, he invented his pseudonym "Le Corbusier", which was used to sign the articles published in L’Esprit nouveau, a magazine founded with the painter friend Amédée Ozenfant.
o pseudonym, a common practice among the artists of the time in Paris, is inspired by the surname of the maternal grandfather Lecorbésier.

In 1923 Le Corbusier published Towards an architecture, in which he exhibited his revolutionary ideas on modern architecture, which are still considered fundamental. The text deals in particular with five major principles, possible through the introduction of reinforced concrete:
Pilotis - pillars that support a building and isolate it from the ground.
Toit terrasse - terrace roof, with garden and swimming pool.
Plan libre - plan of the free building.
Façade libre - free facade, without pre-established schemes.
Fenêtre en longueur (or ribbon window), which cuts the facade of the house in length, making the interior very bright.

These elements are present in the Ville Savoye in Poissy, not far from Paris, built between 1928 and 1931, among the best known buildings of the Modern Movement.

In 1925 he presented the Esprit Nouveau Pavilion at the Exposition Internationale des Arts Décoratifs in Paris, a project based on the synergy between architectural design and painting which was later considered one of the masterpieces of modern architecture.

Around 1928, he worked together with Pierre Jeanneret and Charlotte Perriand creating a series of furniture items made of metal that immediately became recognized as classics, including the famous extendable armchair called Chaise Longue, made in 1929.

In 1929 he built the Ville Savoye in Passy. In 1930 the first study plan for the urbanization of the city of Algiers and the project for the Swiss pavilion of the University of Paris.

Between 1932 and 1933 he designed and built the hotel-refuge for the Salvation Army in Paris, putting into practice a first attempt at an air conditioning system.

In 1951 he designed the chapel of Ronchamp, and began work in Chandigarh, India. In 1965 he began designing for the new Venice hospital.