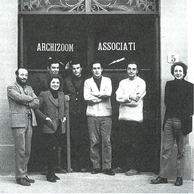 The group embodies the idea of â€‹â€‹architecture and design and festive multicolored, defined as "pop", which shows the state of Superarchitecture of 1966, and the subsequent search for other cultural horizons and figurative.