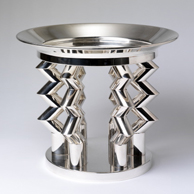 Postmodernism is identified as the historical period between the 70s and 90s and identifies activity in various fields such as art, architecture and design of the 70s and 80s.

A period marked by controversial attempts to define the new cultural scenarios after the great seasons of the modern avant-gardes.

The concept of Postmodernism was born in the early seventies in the European architectural debate, and then came to influence every sector of culture, and in particular the visual arts, the music and film industry, graphics and fashion. It is also a crucial issue for the cultural events of Italy.

In Postmodernism or Postmodernism a series of radical ideas are born, developed in strong contrast to the orthodoxies of Modernism: an overturning of the concepts of purity and simplicity, to be replaced with new forms and colors, historical quotations, parodies, but above all with a new sense of freedom associated to architecture and design.

Among modernists, it was not uncommon for personal style to be viewed as a secondary aspect to the effort to carry out a utopian program. For the postmoderns, on the other hand, style is everything.

In Italy, the postmodern movement in design was represented in the 1980s by the furniture elements designed by Memphis and Alchemia, with a high visual impact and pure, saturated colors.

Subsequently, the creative force of this type of design gradually diminished, abandoning the most "radical" ideas and expressions to move towards more "classic" lines that conform to its commercialization.